Garden Orb Weaver Spider: A very common site in most gardens across Australia.  With a large abdomen, when well fed & have a tremendous colour range from off white to various shades of brown to almost black. They can change colour with each moult to match their surroundings. The Garden Orb Weaver is noticeable for the large and intricate web they weave at night.  They are nocturnal feeders and will seek shelter nearby during the daylight hours.
Their bite in not dangerous to humans, but could inflict mild, local pain & redness up to 3 hours.  The female is larger than the male.

St Andrews Cross Spider: Very common spider in South East Queensland and is recognizable by the distinctive X shape cross through the centre of the web.  The spider sits with the legs in pairs.  The brown and cream coloured males are smaller than the females.  The St Andrews Cross Spider is not aggressive and the bite in nontoxic.

Daddy Long-Leg Spider: Easily recognised by the extremely long, skinny legs & small body.  Found in most urban areas and particularly in houses. The Daddy Long-Leg Spider makes a thin, tangled and messy web in areas where they are likely to be undisturbed, like under furniture, behind doors and in the corner of the ceiling. They feed on insects and other spiders, quickly wrapping the prey in webbing. Considered not to be harmful to humans however, if bitten and if any reaction persists for more than a short time, seek medical attention. 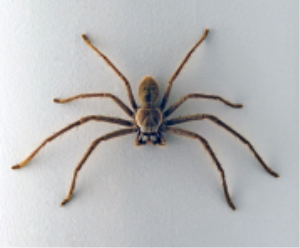 Huntsman Spider: A fast and agile spider with the ability to squeeze into tight spaces.  They are generally found under loose bark on trees, in crevices and under rocks. Mottled shades of grey and brown in colour. Notorious for entering houses and cars and can move sideways and grip smooth, vertical surfaces, like the walls in your house, or running across your windscreen.  (How many times have we all tried to kill a Huntsman on the wall with the trusted thong and we miss, as they dodge sideways!). They hunt insects mainly at night. The Huntsman can give a painful bite, but not considered dangerous.

Male Trapdoor Spider: Often mistaken for the Funnel Web Spider, however, have mottled markings on the abdomen (if you wish to get that close). The adult male is about 25mm with enormous pedipalps (picture above looks like boxing gloves).  The Trapdoor spider is a ground dweller with a burrow lined with silk.  Prefers nesting in drier locations. Hunt crawling insects at night and drags them into the burrow.  Generally, a timid spider and can live 5 - 20 years.  May show aggression when disturbed but normally run away.  The male spider once mature will leave its burrow in search for a mate. The bite of the Trapdoor is non-toxic to humans but can be painful.

Female Trapdoor Spider: The adult female is larger than the male averaging about 35mm with a larger abdomen.  The Trapdoor spider is a ground dweller with a burrow lined with silk, Prefers nesting in drier locations. Hunt crawling insects at night and drags them into the burrow.  The female is a very timid spider and harder to identify, however can live on average between 5 - 20 years.  The bite of the Trapdoor is non-toxic to humans but can be painful.

Common Black House Spider: The Black House and Grey House Spiders are common in urban areas. They are a dark robust spider, with the female being larger than the male, in fact the female is nearly double the size (average female 18mm compared to the male 10mm).  The web is untidy with a silken funnel shaped like entrance.  Black House Spiders are found on tree trunks, logs, rock walls and buildings (in window frames, wall crevices etc).  Drags insects entangled in its web into the tunnel. The bite is not lethal, however can cause temporary pain and cause local swelling.

Wolf Spider: A ground dwelling and very fast and agile spider, that chase down their prey like wolves.  Once they catch their prey, they either mash it up into a ball or inject venom into it, liquefying the internal organs into a wolf-spider smoothie. They live in burrows or in leaf matter. Great hunters and navigators and with their dark, mottled colours can blend in with decaying plant matter while hunting or avoiding predators. The female Wolf Spider
is around 35mm and bigger than the male being around 20mm.  After mating the female will carry the egg sac and once the spiderlings hatch will climb on mum’s back until old enough to live on their own.  Generally, not an aggressive spider, but can give a painful bite which can cause necrotic lesions.

Male Mouse Spider: Vary in size from a 5 to a 20-cent coin in leg span. Black in appearance, the male may or may not have a bright red head and blue abdomen. The males can often be found wandering around in the daytime on open ground, looking for a female. It is venomous and gives a deep, painful bite, known to cause severe illness especially to young children.

Female Mouse Spider: Often confused with the Funnel Web Spider, the female lives in burrows in the ground with single or double trapdoors.  Eating insects, small vertebrates and other spiders.  The females are larger and stockier, more solid with uniform black head & body and their legs are relatively shorter than the male.  It gives a deep, painful bite, known to cause severe illness especially to young children.  Will rise to defence pose quickly, however venom is rarely seen.

White-tailed Spider:  Dark grey coloured spider with a cigar shaped body with a white spot on tip of abdomen.  The female White-tailed Spider is 18mm and the male is 12mm.  Generally nomadic hunters, living beneath bark, rocks and leaf litter.  They hunt and eat webbing spiders; however, the favourite food of the White-tail Spider is the Common Black House Spider, bringing them in or near houses.  Necrotic Ulceration are highly unlikely from the White-tail Spider bite and will cause localised initial burning pain, followed by swelling and itchiness. 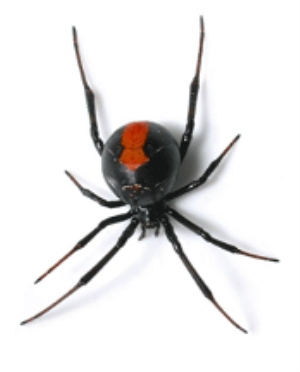 Redback Spider: One of the most recognised spiders in Australia, the female is around 14mm in size with the red/orange dorsal stripe on the abdomen (can be brownish in colour and sometimes black with no red/orange stripe), with a pea like body and slender legs.  The male is much smaller being around 4mm and less distinctive markings.  The web consists of a messy tangled, funnel-like structure and prefer dry sheltered places; under rocks, logs, pool coping, outdoor furniture, barbeques, outdoor pot plant holders and fencing to name a few.  Feeds mainly on other insects, spiders and small lizards.  Only the female bite is dangerous to humans. Pain (which can become severe), sweating, muscular weakness, nausea and vomiting.  Antivenom is available.  *Do not apply a pressure bandage as venom movement is slow and pressure worsens the pain.  Seek medical attention.

Female Sydney Funnel Web Spider: Similar to the male, but larger at 35mm long and more robust with a larger abdomen and no spurs on their legs.  Creates a series of silken trip lines from the entrance to the burrow to warn of potential prey and any danger.  They wait at the entrance and once prey is caught consume prey in the burrow.  The burrow is often built in leaf litter and rockeries.  The diet is mainly of insects, millipedes, snails and small vertebrates.  They are nocturnal. Highly venomous, if bitten pressure bandage area of bite & seek medical attention immediately.