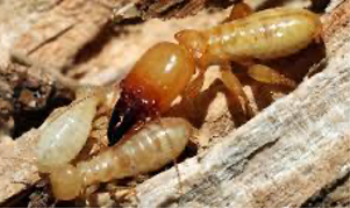 Coptotermes (Acinaciformis): This species is the most destructive                  timber pest in Australia, accounting for more than 70% of all serious damage to buildings.  A single colony can consist of more that 1 million termites.
The nest is built out of sight, often within the base of eucalyptus or other susceptible trees, or completely underground. If found at a building, are often within an enclosed patio, or under a concrete slab on ground, which is ideal for moisture retention and temperature control for the nest.  This termite can also construct a subsidiary nest, most common place is in a wall cavity in a house or building. 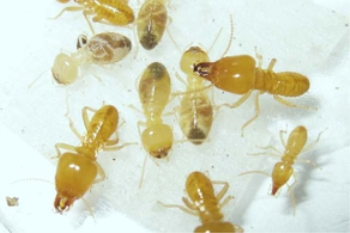 Schedorhinotermes (Intermedius): Commonly found in Eastern Queensland – Particularly along the coastline.The nest is commonly built in tree stumps, in the root crown of living & dead trees, under houses, or enclosed patios or where there is timber in contact with the ground.This species tends to gouge the affected timber and has a fetish around nails used in construction.  The Schedorhinotermes are highly destructive to buildings and other timber structures. If found and the Major Soldier is sighted, then more than likely a large colony is nearby and has the potential to cause severe & rapid damage to structural timbers.

Nasutitermes (Exitious): Found throughout Southern Queensland and particularly around suburban areas, or where eucalypt gum trees are highly prevalent. This species of termites builds a mounted nest, which protrudes 30cm-75cm above the ground.  Nasutitermes are destructive to buildings and other timber structures.  If left unnoticed, can cause severe damage to hardwood timber structures specifically attacking wood in the ground and sound wood in buildings. Poles and fences are also damaged by this
species.  Pine timbers are resistant to these species however, hardwood timbers, particularly its sapwood is preferred. 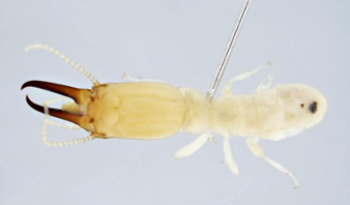 Heterotermes (Ferox): Not a mound building termite and does not have an extensive gallery system, this species is a multi-nester with small colonies in the soil next to stumps, logs on ground, rotting wood and sometimes beside the nest of other termite species. The Heterotermes are destructive and often discovered attacking posts, poles, fence palings and timber decking and flooring, subject to wood decay from weathering or from being in contact with the soil.  Are regarded as a minor structural pest, however recent records have shown that it can cause serious damage to sound timber in service. 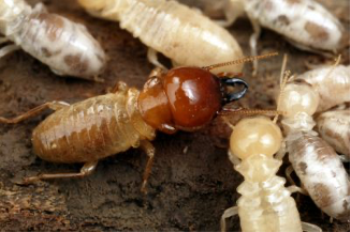 Mastotermes (Darwiniensis): Commonly found in Tropical Queensland – generally north of the tropic of Capricorn and throughout the Northern Territory.  This species of termites has recently been spotted on the Gold Coast in South East Queensland.
Nesting below the soil surface, or in trunks & root crowns of trees and stumps. Once the nest is more that 100,000, they can split off to make sub-nests and are formed constantly, sustaining life for a long period of time, without contact to the original nest.
This “Super Termite” is one of the world’s most destructive & ancient termite species, often causing severe damage to house and buildings, with a large colony consuming more than 7Kg of timber a day.