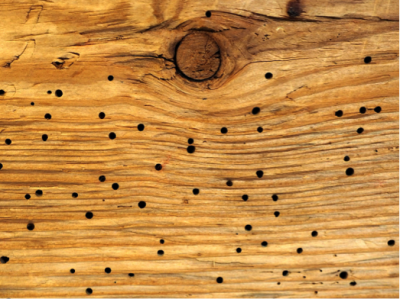 There are several types of timber borers in Australia; some of these are serious some not.  Borers are actually the larval form of different families of beetles.

The adult beetle lay their eggs within the timber.  It is the larval (grub) stage this is most destructive.

It is only after the borer have finished the pupal stage & metamorphose into a winged insect that you can see they have been feeding by the flight holes they create when leaving the timber.

Pinhole borers: - Cannot survive in timber once it has dried out.  Normally leave before or soon after, the timber is used for construction.  The flight holes will rarely have borer dust since they have departed or dead.  These are relatively harmless because they don’t leave as many holes as the more destructive species below. 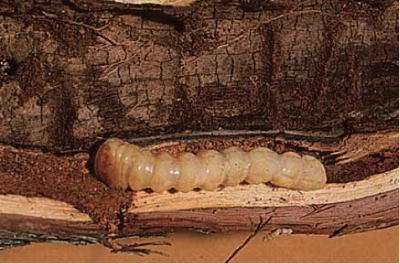 Longicorns: - They leave oval shaped holes, which make it easy to identify with holes 6 -10mm in size, as they emerge from framing timbers or wall linings.  Does not cause serious structural problems, as they can’t breed in the timbers.

Lyctus Borer (Powder Post Beetle): - The Lyctus borer or the Powder Post Beetle mostly attack the sapwood of certain timbers most commonly used for decorative timbers like skirting boards.  Lyctids can be recognised by the 2mm holes and large quantities of flour-like dust.  Not a structural problem, best to replace the affected timber.

Anobium Borer (Furniture Beetle) & Queensland Pine Borer:- Anobiid borers are more serious and attack softwoods like pine.  Anobiids tend to channel along the wood grain, making a 2mm pine holes and leaving large quantities of loose gritty dust with a texture of fine table salt.  They are capable of eating for years.  If you floorboards feel spongy, this could be the problem as this is a common area for them to attack.  Second hand antique furniture and old floorboards may contain borers so examine carefully before bringing them into your home.  Anobiid damage must be attended to and if chemical treatment is required, it is recommended that the treatment to be done by a licenced Pest Control Company.