Why call a professional Pest Controller 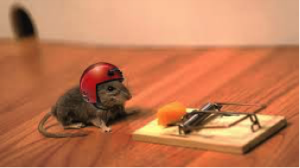 Why call a professional Pest Controller?

Three rats are sitting at the bar talking and bragging about their bravery and toughness. The first says, "I'm so tough, once I ate a whole bagful of rat poison!" The second says, "Well I'm so tough, once I was caught in a rat trap and I bit it apart!" Then the third rat gets up and says, "Later guys, I'm off home to harass the cat."

This is a subject I am not familiar with personally, but these little guys can do some serious damage.  Just ask my wife!  She was always complaining about the rats walking along the fence line and jumping from tree to tree.  While on the phone to me one night, before I moved up to the coast, a rat jumped on her back, oh the SHRIEK of terror!  Never mind what she was yelling and screaming while jumping up and down (just picture Goldie Hawn in Bird on a Wire with the cockroach in her hair scene).

Finally the rat jumped off and scurried away.  She is okay by the way, and we shall not talk of this again.

Turns out there was a nest of Tree Rats (Rattus rattus) eating and rummaging their way through the commercial rubbish bins behind a local hospital.

There are currently over 60 described species of rats in Australia, and they occupy a wide range of the habitats across the country. The majority of these are native species; however two rats (Black Rat and Brown Rat) are introduced species that have rapidly adjusted to Australian conditions.

The widespread and abundant Black Rat (or Roof Rat, responsible for London's Bubonic Plague in 1665) is a commensal rodent that is usually found in disturbed or degraded environments. It is the rat most commonly observed in cities and towns, and is often responsible for the infestation of houses, sheds, warehouses and storages.

If you have a rodent problem or want any advise and would like to book in an Inspection? Please call Accurate Pest Management on 1300 787 415 or go to our website www.accurate-pest.com.au and book online.

Simply leave your details and we'll call you back